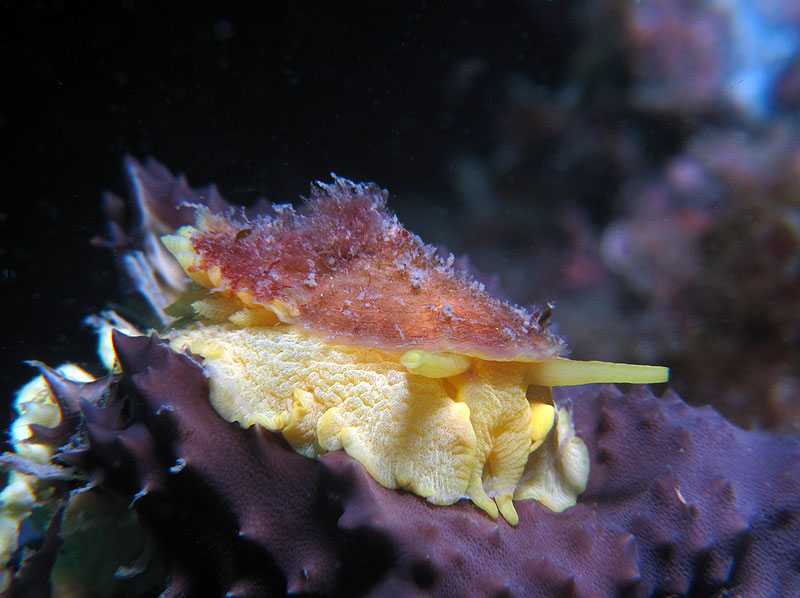 Above: Tylodina corticalis, displaying the significant external features of its classification at rest upon its
sponge food in 16 metres of water at Trench, Inner Gneering Shoals, Sunshine Coast, Queensland,
Australia. (22 mm shell length)

The evolutionary paths of the sea slugs has seen a gradual loss of the molluscan shell to the point where in the adult of all species of the higher order, Nudibranchia, it is completely absent. The more primitive orders however have members that exhibit a wide range of shell variety whether it be a shell into which the animal can completely withdraw for protection or just an internal or external vestige or even in some cases the shell has been lost. The order Umbraculida (containing only a very small number of species) however only has members with an external limpet-like shell upon the dorsum.

Tylodina corticalis is classified in the Umbraculida within the family Tylodinidae. Its limpet-like shell is of a flattened conical shape, somewhat oval and possessing radial ribs that are at times delineated by brown markings. These ribs can be quite prominent in some specimens. The yellow shell has a protective periostracum that can vary from thin and transparent to thick, dark and fibrous. It is often to be seen covered with a brown algal growth obscuring the protoconch that is located towards the centre of the shell. The animal is able to completely withdraw beneath the shell but looking at how large the animal appears when fully stretched out crawling it is somewhat difficult to imagine that this is possible. At such times the foot is considerably extended posteriorly with a rounded end. The anterior margin is also enlarged with a deep transverse groove.

The other observable features it has in common with its near relatives are a bipinnate, plume-like gill located on the right side between the mantle and foot and two pairs of head tentacles that are hollow and enrolled. The anterior pair are oral tentacles joined at their bases by a flap of tissue to form a broad oral veil. The larger, rear-most pair are the rhinophores with eye spots located anterio-medially at each base. Not so observable however is the external ciliated seminal groove, a particularly primitive feature, that carries sperm from the genital pore to the penis. Distributed over the yellow body are small white glands that can produce a yellow secretion believed to contain defensive chemicals derived from their sponge diet.

It is most often found (sometimes in groups) upon its food, sponges of the genus Pseudoceratina (family Aplysinellidae). These sponges often have an external layer or at least patches that are coloured dark brown. Where the slug has been feeding is often conspicuous by the scars that reveal the yellow colour of the sponge tissue beneath.

The spawn is laid as a flat, yellow spiral often upon browsed sections of their food sponge.

Tylodina corticalis normally grows to a maximum size of 50 mm for the animal and 30 mm for the shell, however an extremely large specimen has been recorded at 120 mm long from Jervis Bay, New South Wales. It is a temperate dweller and of the five known Tylodina species it is the only one from Australia. Distribution has been recorded from southern Queensland down and around the southern coastline of Australia to the south coast of Western Australia and also from Lord Howe Island. 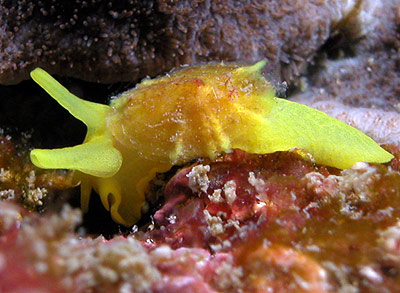 Above: A smaller specimen stretched out crawling
on the substrate. 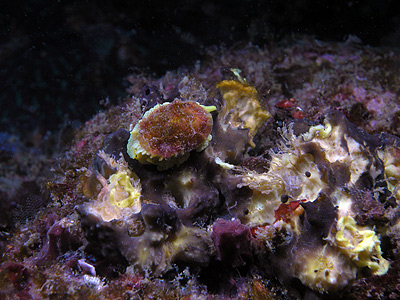 Above: The conspicuous feeding scars produced upon
their sponge prey. 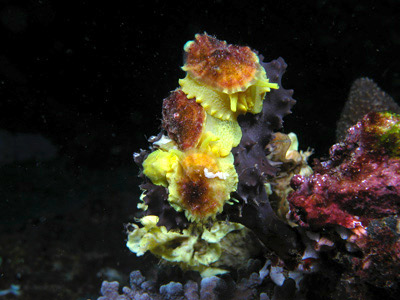 Above: A number of Tylodina corticalis all feeding
upon a sponge colony. 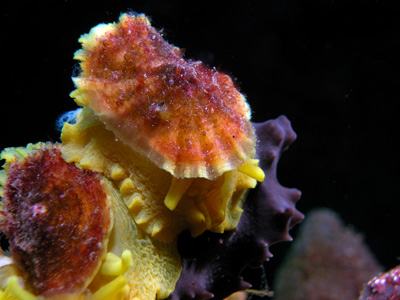 Above: Detail of the umbrella shell.