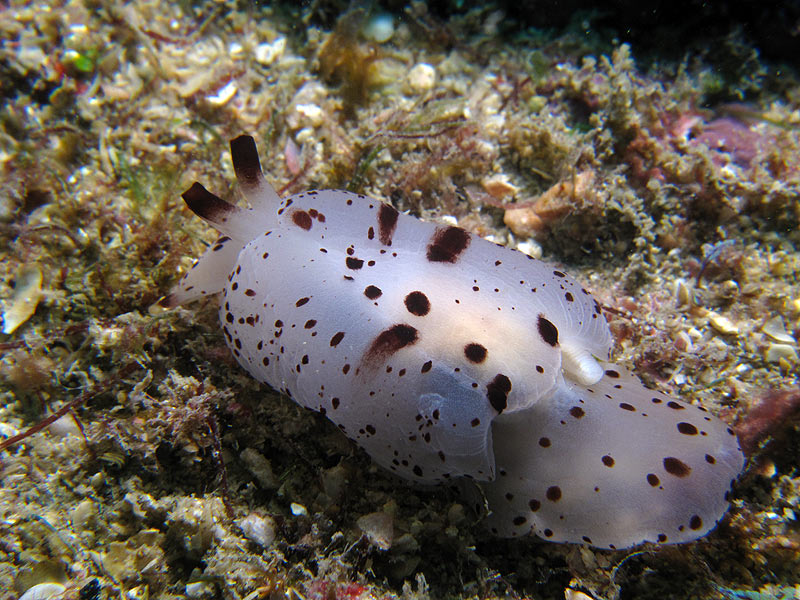 Above: A “typical” Berthella martensi specimen exhibiting all the anatomical features mentioned below.
This example has autotomised the posterior lobe of its mantle skirt and the tip of the gill is thus exposed
on the right side. The other two longitudinal sheer lines are visible. In 15 metres of water on the
Gneering Shoals, Sunshine Coast, Queensland, Australia. (55 mm)

The ability to cast off a particular section of their anatomy in order to facilitate escape from a predator is possessed by a wide range of animals. Well known examples include the tail of some lizards, the legs or claws of crabs and the arms of sea stars. This is referred to as autotomy. Understand though that the mere regeneration of sections of an animal directly damaged by trauma however is different to the act of deliberately shedding a portion and then being able to regenerate it. Autotomy could be crudely described as self amputation – a sacrifice made for survival. The predator is distracted or confused and the prey makes its escape. There are a number of sea slugs with this ability to autotomise particular body parts either as a reaction to a direct assault or from continuous irritation.

Berthella martensi is a pleurobranch, or side-gilled sea slug, belonging to the Pleurobranchidae family of opisthobranch molluscs. As implied in their name their single elongate feathery gill is located down the right side beneath the mantle skirt and not usually visible. The rhinophores are enrolled with a longitudinal slit and close together actually arising from a common fused base. Extending forward from under the rhinophores is a broad trapezoidal oral veil above the mouth and oral tentacles. The rest of the body, including the foot, most of the tail and a small internal shell, is covered by the mantle that has a deep indentation anteriorly to accommodate the projecting rhinophores. The mantle exhibits three distinct furrows, 2 longitudinal that join anteriorly and another running transversely, that indicate fracture lines where those lobe-like portions of the mantle skirt, to the outer side of these furrows, can be disassociated. Under duress or trauma the animal will autotomise one or even all three of these segments to save itself. This will expose the foot and even the gill. The central portion of mantle located over the shell however is never autotomised. This method of survival is combined with the ability to release a defensive secretion of milky appearance and acidic properties that has been reported to burn human skin if handled.

Berthella martensi exhibits quite a wide variety of primary body colours and patterning across the range of its distribution. The most familiar body colour is a translucent white with regular brown spotting however the white may be replaced by cream, yellow, brown or even black and the spotted pattern may be absent and a reticulation of brown lines present instead. Sometimes the lobes that are able to be cast off are delineated by a darker outline as can be the oral veil and foot. There have been finds of specimens whose spots are actually raised tubercles. Different colour forms can even be found at the same dive site. Average adult size ranges from 40 mm to 60 mm.

Locomotion is achieved by cilia on the foot assisted by mucus released from an anterior pedal groove but it is a slow moving slug. Diet consists of sponges fed upon through a protrusible oral tube. The spawn is laid as a white coil.

Distribution could be described as broadly Indo-Pacific from as far west as South Africa and Kenya to as far east as the Pacific coast of Mexico and Panama, as far north as Japan and south to the central coast of New South Wales, Australia. Noted as rare reclusive and only seen at night in some locales but frequently sighted and often out in the open on the Sunshine Coast reefs of Southern Queensland, Australia. 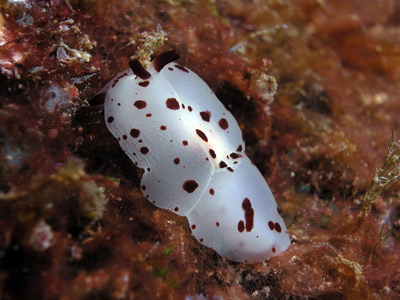 Above: A “typical” entire Berthella martensi with all of
its mantle skirt lobes intact. 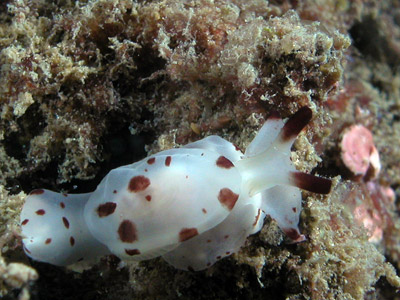 Above: A “typical” Berthella martensi that has
autotomised all three lobes of its mantle skirt. The
central portion of the mantle covering the shell is
intact and in fact is never cast off. 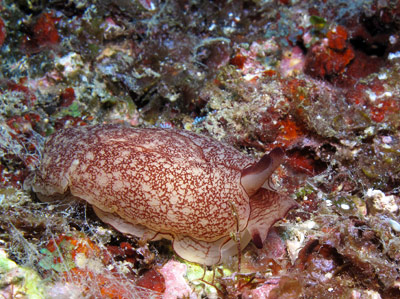 Above: A colour and pattern variation exhibited by a
specimen of Berthella martensi. A more “typical”
specimen was also observed at the same time and site,
less than 5 metres away. In 16 metres of water at Flinders
Reef off Cape Moreton, SE Queensland, Australia. 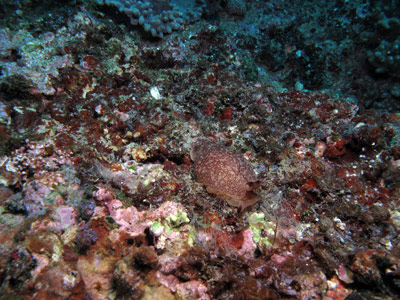 Above: A wide angle shot of Berthella martensi
showing its habitat.