THE PENIS FENCING OF FLATWORMS 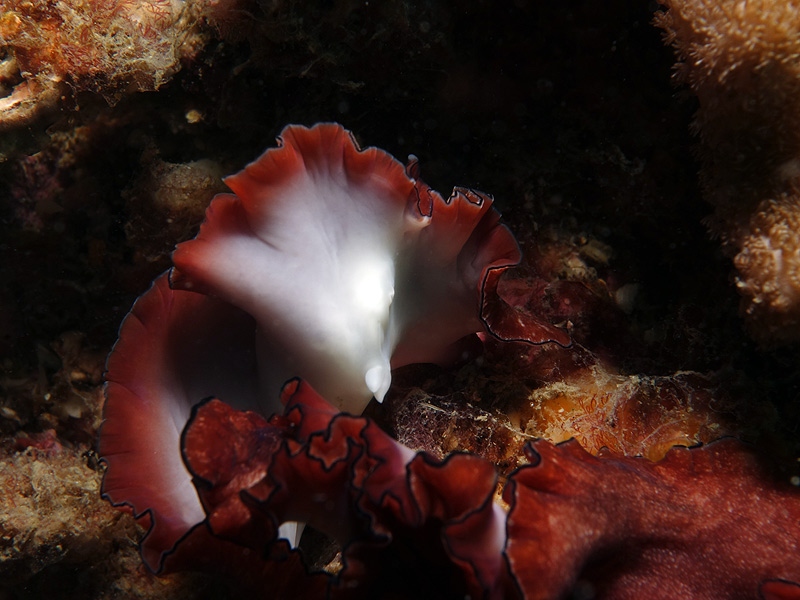 Above: A pair of Pseudobiceros apricus playing the bizarre mating game with the pair of penis stylets of one poised to strike
down through the skin of its partner, in 14 metres of water on the Arkwright Shoals off Coolum,
Sunshine Coast, Queensland, Australia. (60 mm)

Marine flatworms can be secretive by living on the underside of rocks and in deep crevices however members of the Pseudocerotidae family of polyclads are conspicuous in both appearance and behaviour. This serves to advertise their toxic nature to potential predators. Within this family is a genus, the Pseudobiceros, containing the largest of the polyclads and typically exhibiting a smooth dorsal surface with a raised longitudinal medial ridge and extremely ruffled margin. The characteristic feature however, and one that is not usually obvious, is the possession of two male pores i.e. two penises or penis stylets located on the ventral surface.

Flatworms are hermaphrodites having both fully functional male and female reproductive systems. Whilst most mate in a typical fashion, male parts into female parts, some have developed a truly bizarre method. These flatworms, which include the Pseudocerotidae, use what can only be termed a rough and primitive, crude if you like, method of insemination. They stab their penis through the skin of their partner and pump in the sperm. Intradermal hypodermic insemination is the technical term for the method. It is not just a straight forward matter of injecting each other either. Upon approach each rears ups and displays the penis stylets on the underside and attempts to strike the partner anywhere in the body but at the same time trying to avoid being struck themselves, a process that has been termed penis fencing. They lunge and duck and weave and skirt around each other looking for the right opportunity to strike just like a pair of fencers. The Pseudobiceros strike with their twin penis stylets at the same time thus doubling the amount of sperm for fertilisation with each successful strike. Following several strikes they will separate and carry on as before with either one or both inseminated to differing degrees.

Pseudobiceros apricus is one such species that uses this method. To watch them in action is enthralling. After they separate white blisters or deposits of sperm can be observed on the skin surface often at several points on one or both of the partners. 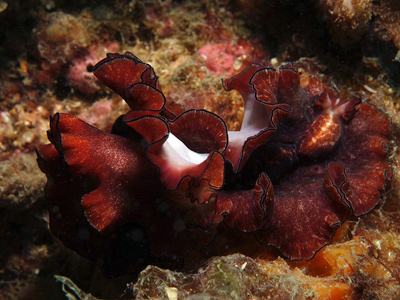 Above: They writhe, duck and weave looking for
the advantage and produce an amazing spectacle
with their ruffled margins. 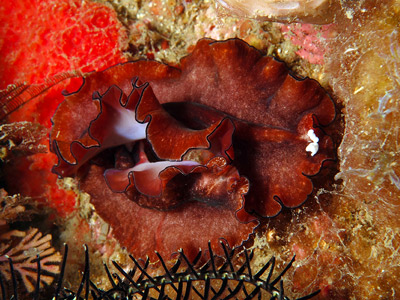 Above: The pair separate after their extraordinary
display with one exhibiting the white sperm deposits
(at right) resulting from a successful strike by
its fencing partner. 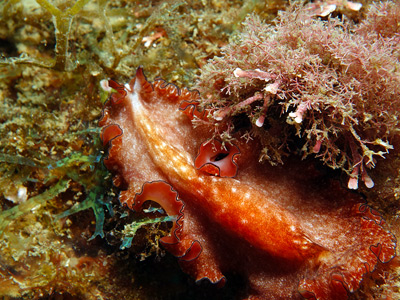 Above: A single specimen of Pseudobiceros apricus
moves across the substrate out in the open knowing it
is safe from fish predation due to the toxins
(similar to ciguatera) its flesh contains.