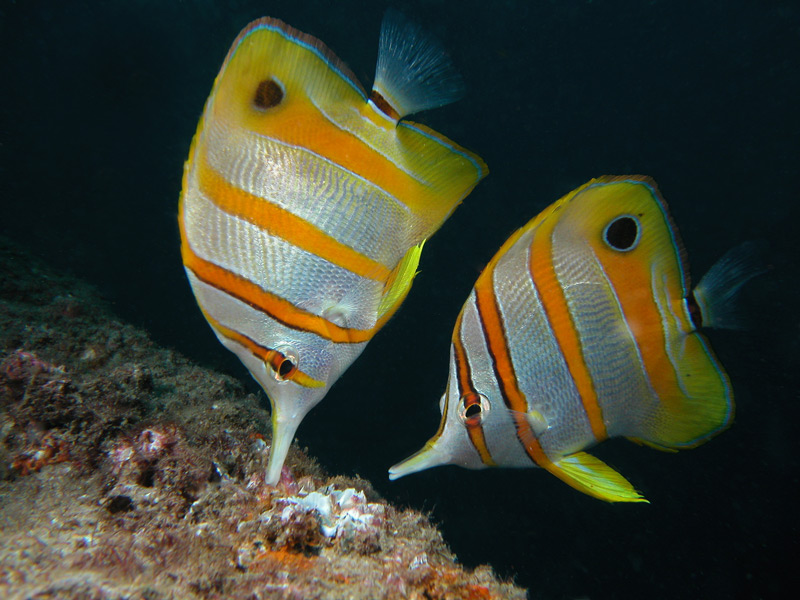 Above: A pair of Chelmon rostratus working their territory together pecking at the substrate for
food in 9 metres of water at Old Woman Island, Sunshine Coast, Queensland, Australia. (130 mm)

The Butterflyfishes are named for their propensity to flit around the reef and the corals much like that of a butterfly among the flowers. They busily, but gracefully, go about their business either singly or as mating pairs without exhibiting any unusual or remarkable behaviour. Being small and agile and with a laterally compressed and deep-bodied form they are able to slip into crevices for protection from any perceived threat. The family name is derived from chaeta = bristle and odont = tooth which makes reference to their small needle-like teeth that resemble a brush. Colour changes from juveniles to adults are not as significant in the Butterflyfishes as compared to the Angelfishes, and juveniles are therefore usually easily recognised and matched to the adult. The larval stages however are considerably different and were for a time considered a separate genus. The term Coralfish is often substituted for Butterflyfish.

Chelmon rostratus is readily distinguished with its elongated snout, four copper coloured vertical bands and a distinctive false “eyespot”, black encircled with a white ring, positioned posteriorly on the dorsal fin at the top of the fourth band. The long snout and small mouth enable them to pluck out prey, usually small invertebrates, from crevices that other fish have no chance of reaching and to pick at coral polyps. There is a theory that the false eyespot acts as a decoy to mislead predators whilst the true eye is smaller and masked within a stripe across the head. The major observable colour change with age is a gradual fading of the black bars either side of the copper stripes.

There are no visible differences between the male and female as is the case with many other fish, either in size, anatomical features or colouration. At the time of spawning however the gravid female will be visibly distended with eggs.

Recorded from the Eastern Indian Ocean to the Western Pacific up to the Ryukyu Islands, Japan and down into New South Wales, Australia. More commonly reported on the coastal reefs.