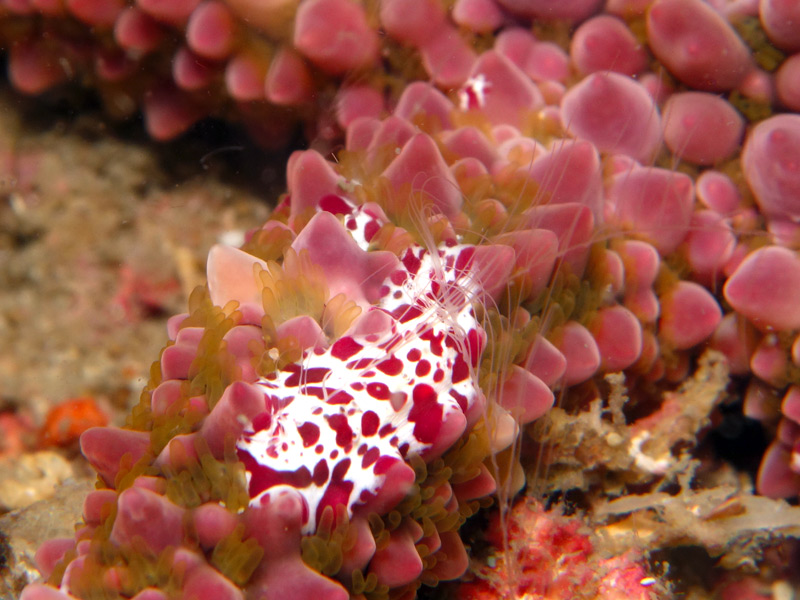 Above: An adult Coeloplana astericola taking a ride upon an arm of its host the sea star Echinaster callouss
(warty or calloused sea star) while it “fishes” for prey with its streaming tentacles.
Currimundi Reef, Sunshine Coast, Queensland Australia. (15 mm)

There are a number of creatures that don’t fit neatly into the system of classification we create so that we might better understand the relationships between them all. The ctenophores, commonly called the comb jellies, are one such group. Although they look at first glance like a typical jellyfish, transparent, gelatinous and swimming through the water often with trailing tentacles, this resemblance is only superficial. The similarities merely reflect an evolutionary convergence. They don’t pulsate for locomotion like the jellyfish but instead have eight rows of comb-like plates (ctenes) bearing very large cilia that beat rhythmically to propel them through the water. Their tentacles do not have stinging cells but rather adhesive cells called colloblasts for food capture to satisfy their carnivorous diet. (Those that have previously been reported to possess nematocysts, or stinging cells, have been found to have sequested them from their cnidarian prey to use for their own purposes.) Other differences include a third layer between the ectoderm and the endoderm called the mesoderm, the first group of animals to have such, and also the first group to have a flow through alimentary system with a mouth at one end and an anus or a least anal pores at the other. They have a different life cycle as well in not having both the medusa and polyp stages. These features along with a few others has seen them separated from the cnidarians into a phylum of their own that is entirely marine. They present in a great variety of shapes and sizes being represented by approx. 150 species worldwide.

Within this phylum, the Ctenophora, is an order that is somewhat different again in that it does not swim through the water column like the rest but instead is quite flat and slides along the substrate a little like flatworms with which they are often confused. These are the platyctenes (order Platyctenida) and are often referred to as creeping comb jellies or benthic ctenophores. Some species will attach themselves to the surface of certain plants or animals (sponges, sea stars, urchins) and live an epizoic lifestyle. They are usually much more colourful than their swimming relatives.

Coeloplana astericola however hitches a ride on the aboral surface (top) of certain sea stars to get around, sometimes in large numbers. They trail out their tentacles from two pores, one at each end of their rectangular or oval shaped body, in the search for food, that are then dragged back across the mouth. They are hermaphroditic releasing both eggs and sperm simultaneously into the water column for external fertilisation. They have a free living laval stage before settling on the bottom, or on their host, losing their comb plates and taking on the adult form. They are also reported as being able to reproduce asexually by a process referred to as fragmentation whereby a single individual can break up into several. This may serve to explain why one sea star may have numerous ctenophores upon it whilst a close neighbour has none at all. 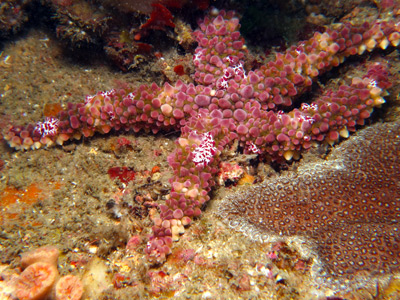 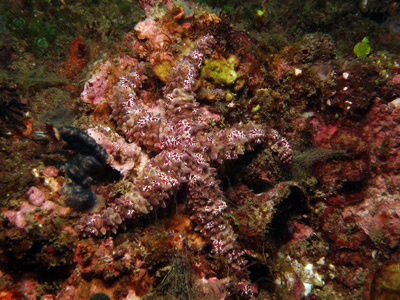 Above: An even more heavily infested specimen
of sea star Echinaster callouss. 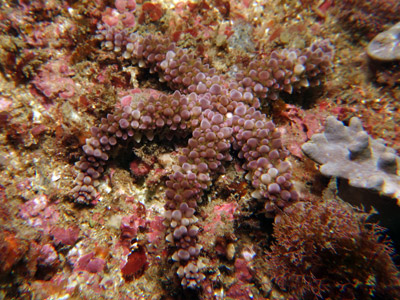 Above: Not more than a metre away lies another
specimen of the same species of sea star without a
single ctenophore upon it. 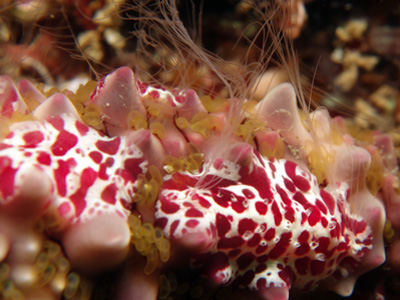 Above: A tangle of sticky threads originate from
the feeding pores each end of the ctenophore.