‹ CRITTER ID IS BACK THE UMBRELLA SHELL SLUG › 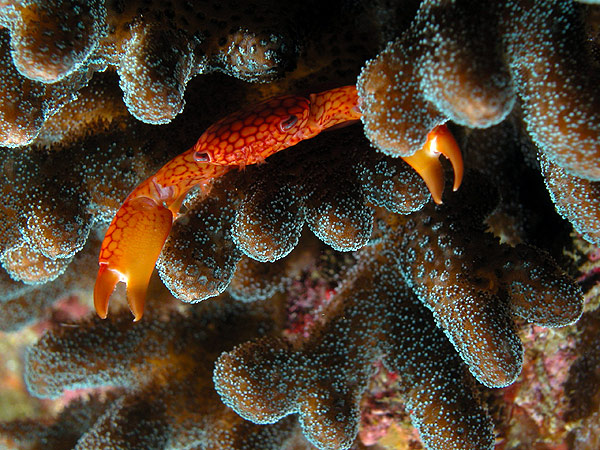 Above: An inquisitive Trapezia septata comes out from within its coral hideout to
see if I’m a threat; in 14 metres of water on the Gneering Shoals off Mooloolaba,
Sunshine Coast, Queensland, Australia. (15 mm)

There are many many types of crab in the sea. Most people only know about the couple of species that we eat or the few they see scuttling over the seashore sand and rocks. They are however the most diverse of all crustaceans with approximately 7000 species.

Trapezia septata belongs to a group of crabs referred to commonly as Coral Crabs or Guard Crabs. Trapezia septata lives amongst the branches of species of the Pocillopora hard corals in a symbiotic relationship. It could almost be considered an obligate associate. Constantly cleaning and defending their host they receive in return a safe haven and access to food. Trapezia septata have been observed to protect the host by keeping pest species at bay even to the extent of aggressively attacking the spines and tube feet of the crown-of-thorns starfish, Ancanthaster planci, to drive them off thus preventing destruction and loss of their coral home.

Usually seen as a male and female pair within the one colony they eat particles trapped by the coral polyps, mucus secreted by the coral and general detritus. They will defend their territory against members of their own species but have been observed to tolerate other species if they are not destructive.

Aquarists have noted that corals that host species of Trapezia crabs have a higher survival rate, stronger growth and appear healthier, providing they were of a reasonable size to begin with.

Trapezia septata have a network pattern on their carapace (shell) and chelipeds (claws) that is characteristic and is made up of red/brown lines connected in the shape of hexagons or pentagons giving a honeycomb effect upon an orange background. The background colour can vary to pink or even cream. The left and right chelipeds are of equal size. The legs don’t carry the honeycomb pattern and are instead just a plain orange colour. It is interesting to note that colour and patterns have been more useful for distinguishing species of the Trapezia genus due to the anatomical difference being small.

Its distribution has been recorded throughout most of the Western Indo-Pacific region. They reach 20 mm in size.