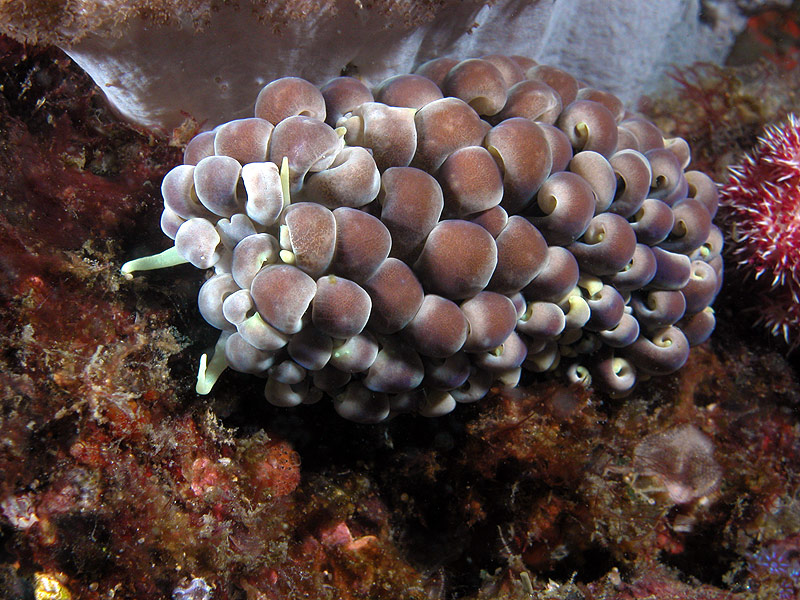 Above: Phyllodesmium magnum displaying the profusion of zooxanthellae filled cerata that gives it the
nickname of “solar-powered” sea slug, in 14 metres of water at Old Woman Island, Sunshine Coast,
Queensland, Australia. (90 mm)

Just about every living thing in this world is preyed upon and eaten whole or in part by other living things. That’s just the way of nature. As a group the sea slugs have a diverse diet that covers algae, sponges, worms, hydroids, anemones, corals soft and hard, bryozoans, ascidians, crustaceans, molluscs, eggs and even each other. Many of these have developed various forms of defence in attempts to deter predators but it is an evolutionary race between prey and predator to stay one step ahead.

Phyllodesmium magnum is an aeolid nudibranch that feeds upon corals, not the hard reef building species but a few of the soft octocoral types. It is characterised by the distinctive densely packed cerata it bears upon its dorsum. These cerata are large, smooth, curled and flattened. They all contain many branches of the digestive gland. Within those branches the nudibranch farms live zooxanthellae that it has obtained from the tissues of its food source.

Zooxanthellae are microscopic singled-celled plants (dinoflagellates) of the genus Symbiodinium that live in the tissues of certain animals in a mutualistic relationship. The best known hosts are the cnidarians such as anemones, corals and jellyfish but are also seen in giant clams, the Tridacna. Certain species of nudibranchs and flatworms derive their population of zooxanthellae secondarily through their cnidarian diet.

The presence of these zooxanthellae in the nudibranch Phyllodesmium magnum can be observed from the brown mottled appearance (sometimes lilac) of the cerata and even the skin of the body and rhinophores. The nudibranch obtains nutritional benefits from the byproducts of the zooxanthellae photosynthetic activity that are released into the digestive gland. The expanded flat surface of the nudibranch’s cerata with its profusely branched digestive gland is always directed outwards/upwards towards the sunlight for maximum exposure increasing the efficiency of the zooxanthellae. Because of this capability of obtaining nutrients from the photosynthesising zooxanthellae they are referred to as “solar-powered” sea slugs.

Unlike many aeolid nudibranchs, species of Phyllodesmium including Phyllodesmium magnum, do not carry the defensive cnidosacs full of stinging nematocysts, obtained from the coral, in its cerata. Generally speaking most soft corals and especially the ones that Phyllodesmium magnum feed upon have nematocysts that are less powerful than those of the hard or stony corals, anemones and hydroids. This might make them unsuitable to collect and store in cnidosacs for defensive use. Instead it engages in a type of defensive behaviour called autotomy whereby it deliberately casts off its cerata to distract and confuse potential predators. The cast off or autotomised cerata wriggle energetically for some time and produce a sticky secretion.

The octocoral species that Phyllodesmium magnum has been observed feeding upon all belong to the family Alcyoniidae and include Sinularia and Sarcophyton. 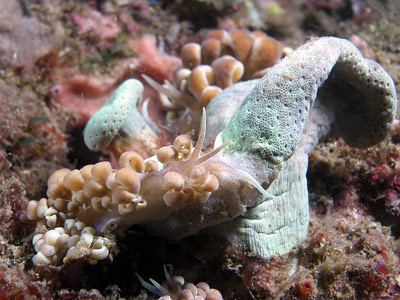 Above: Three specimens of Phyllodesmium magnum
attacking a colony of Sarcophyton sp. soft coral. The
white feeding scar is observable under the central
specimen where the top layer of tissue has
been removed. 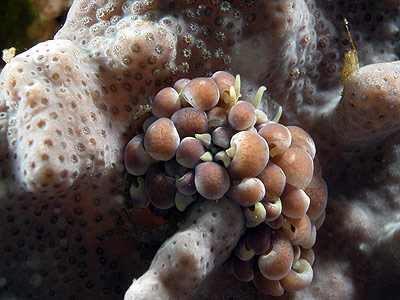 Above: Feeding on Sinularia sp. Note some of the upper
polyps partially protruded. Refer to photo
below for result of feeding. 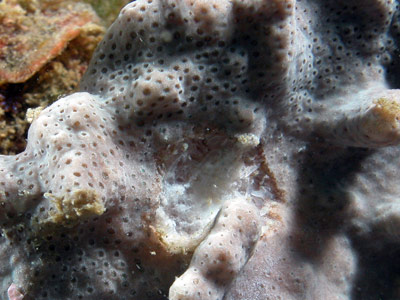 Above: The feeding scar revealed showing what the
sea slug has consumed of the coral. Note all of
the polyps now tightly withdrawn. 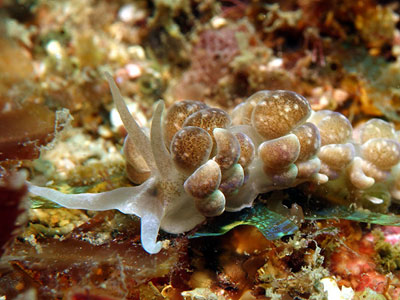 Above: A close-up head shot of Phyllodesmium
magnum showing the rhinophores and oral tentacles. 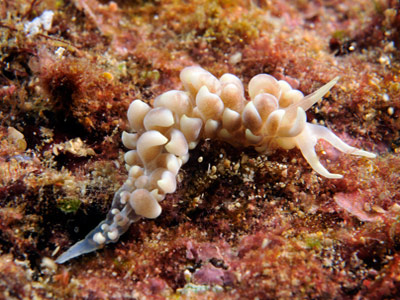 Above: A specimen of Phyllodesmium magnum
stretched out and moving over the substrate. Note the
smaller regenerating cerata towards the tail. The original
larger cerata in that region were possibly autotomised
as a reaction to predator attack. 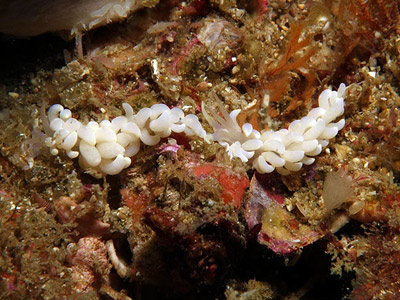 Above: Two specimens of Phyllodesmium magnum
engaging in tailing/trailing behaviour. It has been
postulated that perhaps they are staying in touch
with a potential mate or for food searching purposes.
These are particularly white individuals. 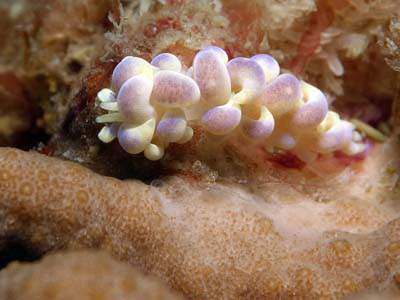 Above: A juvenile specimen of Phyllodesmium
magnum showing the lilac colour that the
cerata can exhibit.