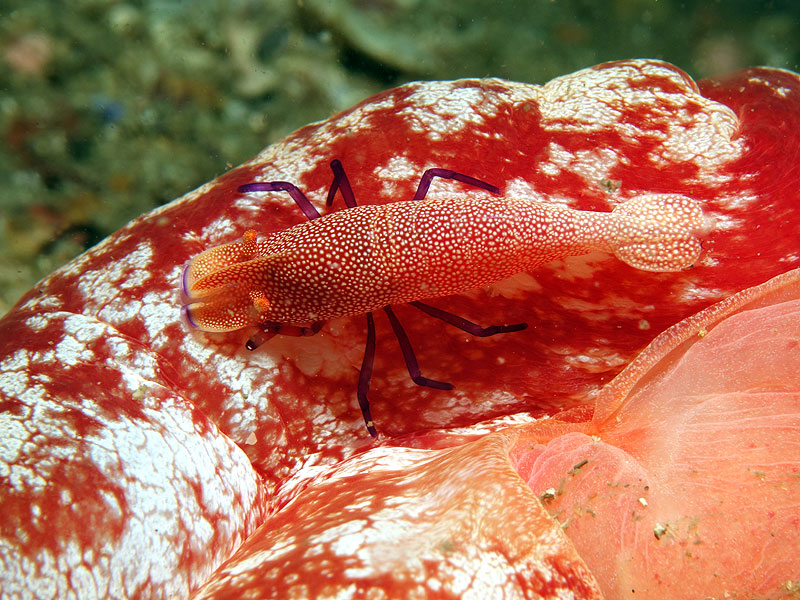 Above: Periclimenes imperator, the emperor shrimp hitching a ride on the mantle of the spanish dancer
nudibranch Hexabranchus sanguineus, in 16 metres of water at Fairyland, Gneering Shoals, Sunshine Coast,
Queensland, Australia. (18 mm)

Many animals live their life on a host and most times it is for the purpose of preying upon that host as a food source. Very occasionally though some use the host as a means of conveyance and protection as they search for suitable food along the way. This method enables them to cover a great deal of territory with minimal expenditure of energy whilst taking advantage of the passing smorgasbord.

Periclimenes imperator is a shrimp that has a predilection for living, often as pairs, on mobile invertebrates such as nudibranchs and sea cucumbers. Less frequently they are seen on sea urchins, sea stars and even cowries. Other species of shrimp seem to prefer a more sedate lifestyle on anemones, soft corals, gorgonians or crinoids (feather stars).

It is not readily apparent if these hosts of Periclimenes imperator receive any benefit from this relationship however some authorities have suggested that the shrimp assist in controlling parasites on the host. They feed upon detritus plucked from the passing substrate and in some cases even ingest the host’s mucus and fecal pellets.

My observations of these shrimp on Hexabranchus sanguineus, the spanish dancer nudibranch, has revealed that the small specimens tended to reside and hide amongst the feathery gills whilst the larger ones moved in and out of the rolled edges of the nudibranch’s mantle and oft times even disappeared over the side and under the mantle if threatened. The nudibranch appears unperturbed by the scrabbling of the shrimps going about their business.

The nudibranch has distasteful possibly toxic chemicals stored in its body derived from its sponge diet. The red colour acts as a warning of this to potential predators so the shrimp takes full advantage by adopting the colours and patterns of the host in order to blend in. The colour and patterning of individual shrimps seems to vary to match somewhat the colour and pattern of different hosts. I have only observed this spotted pattern upon the similarly spotted Hexabranchus sanguineus.

These shrimps have been recorded growing up to 20 mm in length. Distribution is broad stretching from western Indian Ocean across to the central Pacific. 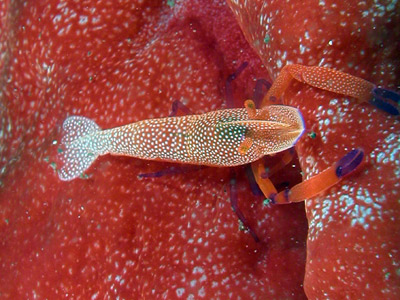 Above: Waiting patiently for the next meal to slide by.
Notice the broad antennae scales projecting even past
the rostrum that give it the duck-bill appearance. 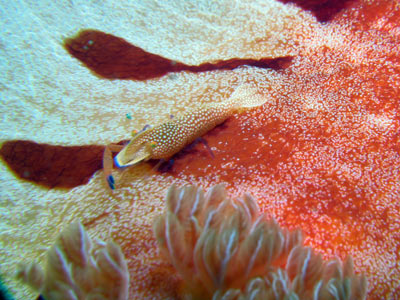 Above: A small adult showing how their colour and
pattern serves them well to hide on the
nudibranch’s mantle. 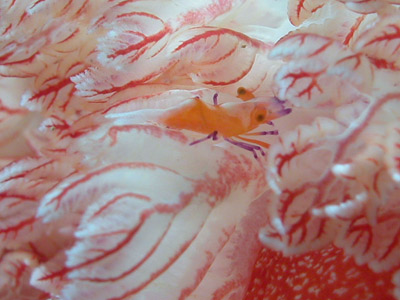 Above: A juvenile of the species hiding amongst
the feathery gills of the spanish dancer. 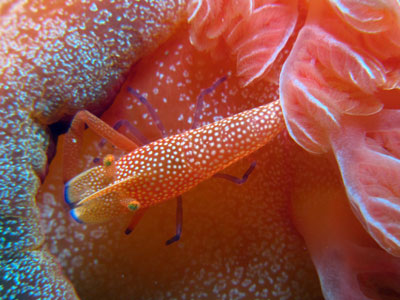 Above: This specimen photographed between the gills
and the rolled mantle margin appears to have lost its
first left cheliped or clawed arm. 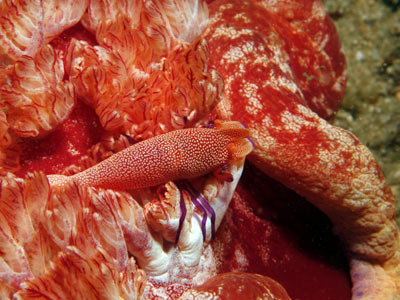 Above: The antics of the shrimp never seems to
bother the nudibranch. 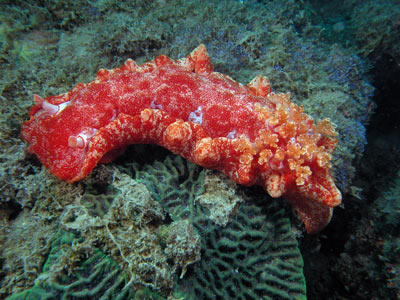 Above: Hexabranchus sanguineus.
You won’t spot the shrimps from this far away.