MAGNIFICENCE IN THE MUCK 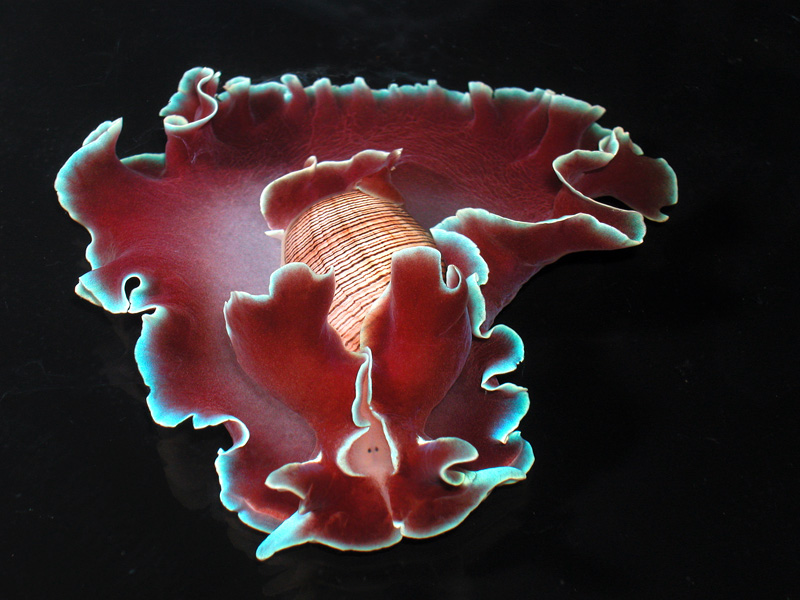 Above: Hydatina physis, the Rose-petal Bubble shell with all its flamboyant lobes displayed.

There is a group of sea slugs popularly known as “Bubble Shells”. As a group these are considered the most primitive of all the sea slugs and as the name suggests many of these still retain the molluscan shell that most other slugs have evolved to lose. They are able to withdraw, albeit sometimes only partially, into it for protection. They are mostly carnivorous hunting in the muddy and sandy substrates for polychaete worms and other molluscs such as the less mobile bivalves.

Hydatina physis is a large, flamboyant and brightly coloured member of the Aplustridae family, part of the Cephalaspidea order known as the Headshield slugs. Happening upon one when diving and searching silty substrates is a startling experience. Its very large ruffled parapodia-like foot lobes and headshield lobes when all unfurled create a magnificent sight as it glides along the sea floor. The anterior lobes of the headshield are enrolled laterally to funnel water over the Hancock sensory organs lying beneath whilst the posterior ones are triangular and raised to cover the shell with the close-set eyes peering out through a cleft in-between. The headshield lobes serve to protect the eyes and mantle cavity organs during burrowing. Cupping up over the rear of the shell is an infrapallial lobe. The dominant colour is red but this is fringed with light blue and often a narrow white band to the very edge. The shading can range from a deep rich maroon to a quite pale pink. It is able to partially withdraw into its voluminous globose shell. This shell is smooth, thin and fragile giving rise to another common reference of Paper-bubble. It is cream in colour and patterned with numerous narrow brown spiral lines of varying width and intensity. The spire is flush or sunken such that the last whorl conceals all the others. They lack an operculum with which to seal the wide aperture of the shell.

Cirratulinid polychaete worms form the diet for which they have a specialised elongated oral tube that can be inserted down into worm tubes to access and extract their prey. Most authorities report that they remain buried during the daylight hours only emerging to feed at sunset however I have observed and recorded them on a number of occasions out in the open during the day. Unlike nearly all other sea slugs Hydatina physis and its family members still possess an external penis whereas the others maintain it within an internal sac and only evert it when mating. Like all opisthobranchs Hydatina physis is a hermaphrodite where every animal is both a functional male and female. They swap sperm parcels during reciprocal copulation following which both parties lay eggs. The spawn is produced as a white to cream convoluted egg ribbon assembled upon the mantle and then laid on the substrate to which it is attached by a mucous thread.

Distribution is circumglobal in tropical & sub-tropical waters. Hydatina stromfelti from the Canary Islands and Hydatina vesicaria from the Atlantic are both considered by Rudman to be synonyms. Maximum shell size is recorded at 60 mm with the animal crawling length reaching 120 mm. 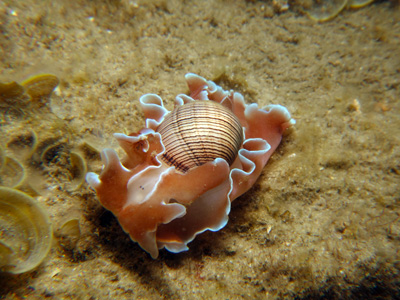 Above: Moving across the substrate hunting for prey.
On this occasion it was sighted during the day. 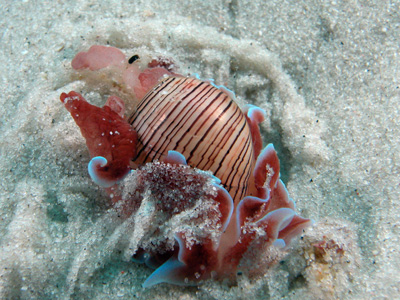 Above and below: A sequence showing Hydatina
physis in the act of burying itself in the sand trying to
avoid the dive lights after being sighted during
a night dive. 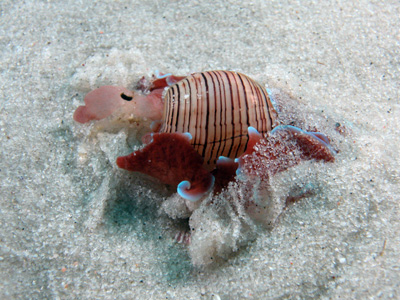 Photos and text by David Mullins