LIFE AMONGST THE STARS 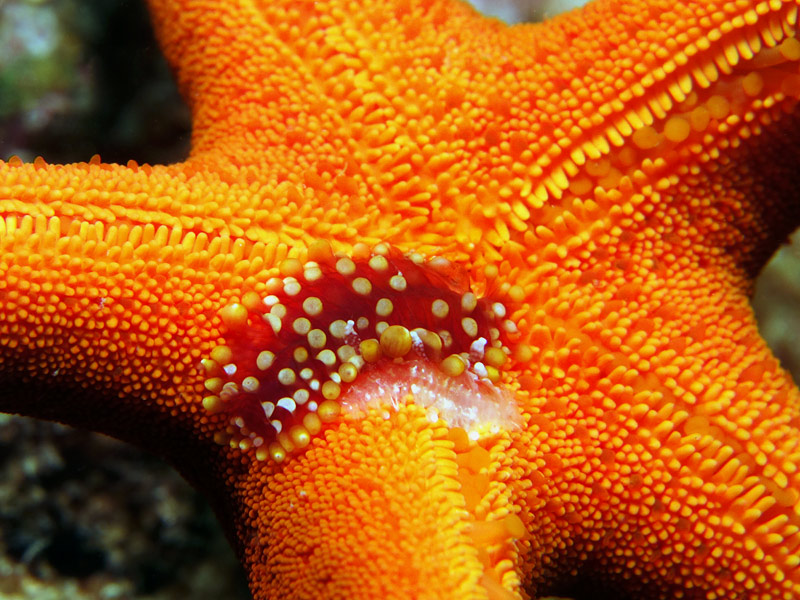 Above: Asterophilia carlae, the symbiotic scale worm found in its usual habitat on the ventral or underside of a sea star.

Sea stars are benthic dwellers and very slow moving benthic dwellers at that but they do move. One species has been recorded as moving at a rate of more than a metre per minute when not feeding. They possess a number of features to help prevent other lifeforms from taking up residence on their dorsal surface. As well as spines of various construction and size (some being venomous)they also have small pincer-like structures called pedicellariae (some also venomous) that are effective in keeping the sea star’s surface free of debris and also from fouling by the likes of barnacle larvae for example. The ventral or underside however is different. Here are found the numerous tube feet used for locomotion and attachment. They are located in the ambulacral grooves that radiate out along each of the arms from the central oral disc, one per arm. Various species of small shrimps, pearlfishes and polychaete worms take up residence on the underside of sea stars for protection even burrowing into the ambulacral grooves to conceal themselves completely.

Asterophilia carlae is a polychaete belonging to the polynoid worms also known as scale worms that reside underneath sea stars. They are covered by scales called elytra which are separate from and not to be confused with the bristles called chaeta. In some species these are hard but in Asterophilia carlae they are soft and transparent. Because it lives symbiotically among the tube feet of sea stars it’s most conspicuous feature, the many dorsal cirri with their inflated tips act as the perfect mimic. Colour is normally in accordance with the ventral colour of the host helping to further camouflage its presence however I have photographed them upon contrastingly coloured hosts as well.

Polychaetes that live in a symbiotic relationship are relatively rare in proportion to the overall number of species. Parasitism is a more prevalent association except in the polynoids where more than 50% are symbiotic. This might be considered an artefact of classification whereby the features used to classify and group them are actually the adaptations to their lifestyle.

This species is very similar to the more recently described Asterophilia culcitae however the features that separate the two can only be determined under a microscope. The choice of name in this instance is based on the current known distributions. Both have also been reported to be symbiotic with some species of crinoid, the feather stars. 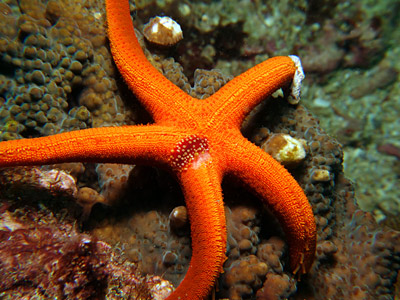 Above: A flipped sea star showing its resident scale
worm caught outside of the ambulacral grooves of
the ventral surface. 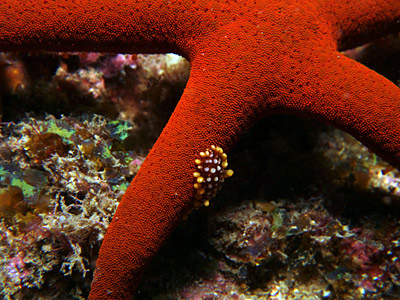 Above: Scurrying back under the sea star. The scale
worm is difficult to photograph as it moves quickly to
whichever side of the sea star is facing downwards.

Photos and text by David Mullins