Above: The allied cowrie Cuspivolva platysia displaying the warning colouration on its host
the gorgonian octocoral Euplexaura sp. and its black siphon in 6 metres of water in the
Mooloolah River, Mooloolaba, Sunshine Coast, Queensland. (8mm)

One of the true delights in searching for small critters on the sea floor is the occasional finding of a small colourful allied cowrie. These shelled molluscs most usually have brightly coloured, patterned and textured mantles wrapped up over the shell that often, but not always, camouflage them upon their host. They are commonly referred to as allied cowries because they have an appearance that superficially resembles the true cowries to which they are closely related and they are allied to (associated with) a specific host, meaning they are obligate feeders upon that host. The hosts are octocorals (soft corals and gorgonians) and the ovulids use their radula (a rasping tongue) to consume the soft tissue. They spend their whole existence upon a specific host. The nematocysts (stinging cells) that these octocorals use for feeding and defence are simple, small and powerless against these predators however hydroids and anemones that have more powerful nematocysts are dangerous to ovulids. Additionally the ovulid must be able to metabolise the toxins that the octocorals produce to ward off attack by other predators.

Cuspivolva platysia is an uncommon but not rare ovulid with patchy distribution reports from Japan, Hong Kong, the east coast of Australia (central & southern Qld & central NSW) and north-western WA. Surprisingly I have found no references to them being found in the biodiverse Philippine or Indonesian waters.

This specimen was found a little way upstream from the mouth of the Mooloolah River, Mooloolaba, Sunshine Coast, Queensland during a night dive. It was located upon an unusual species of Euplexaura (family Plexauridae) a type of gorgonian octocoral, that was growing as a single unbranched stem out of the riverbed silt. Species of Euplexaura can withstand moderate turbidity such as is experienced in the river, except in periods of flood, with the strong tidal currents providing the necessary continuity of food particles that the polyps filter out of the water.

The colour and pattern exhibited by Cuspivolva platysia could in no way be described as providing camouflage when upon its host. In fact the opposite is true. It is issuing a warning that it is not safe to eat. This type of conspicuous display is referred to as aposematic colouration. By this method different species and even different types of animals such as nudibranchs and flatworms use similar warning colours thus spreading the load of teaching predators. The animal may or may not be poisonous but the warning works just as well. The black and yellow/orange combination is widespread, its simplicity and starkness obviously being effective.

Note: Some texts use the name Primovula platysia for this species but this is now considered a synonym.

Acknowledgement: I wish to thank Sue Churchill & Rogan Draper, good friends and ovulid experts, for confirming the ovulid identity and supplying that of the host. 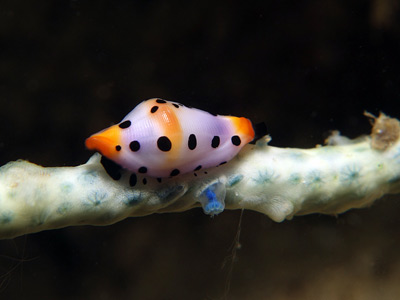 Above: Displaying the three bands of orange on the
shell visible through the transparent sections
of the mantle.