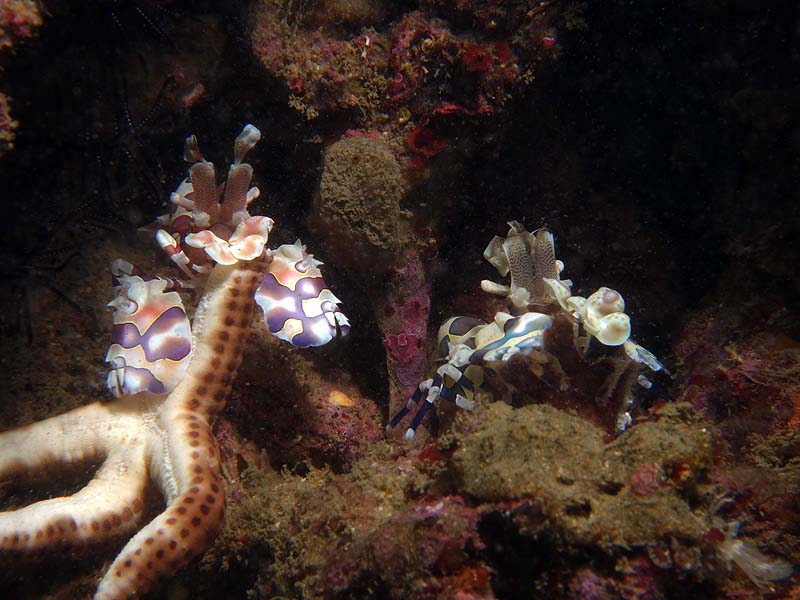 Above: A pair of Hymenocera picta (Harlequin Shrimps) looking out from their lair with the female eating
from the arm tip of a captured sea star Tamaria sp. in 9 metres of water at Old Woman Island, Sunshine Coast,
Queensland, Australia (50 mm). Note the slightly different colours between male and female.

Prawns and shrimps are actually one and the same with the name prawn being used in Australia for the larger and edible species whereas throughout most of the world both are called shrimp. Along with the crabs and rock lobsters they are all placed in the order Decapoda (meaning ten footed) characterised by having 5 pairs of walking thoracic legs with the first two or three pair being modified at the end with claws.

Hymenocera picta is a beautifully coloured and patterned shrimp such that it is commonly called the Harlequin Shrimp. It is also called Paddle Shrimp by some, being a reference to the fixed side of the claw (the pollex) on their second legs (pereiopods) being greatly expanded into a large flat plate. These can be used for defence by nipping with the claw or by using the large plate shape as a shield. With this colouring and bizarre shape they are unmistakeable when sighted.

These shrimp grow to 50 mm and usually live as a male and female pair with the female being a little larger than the male. Some of these pairings have been reported to exist for many years. In addition to obviating the need to search for a mate for reproductive purposes the pairing also serves to create a team for hunting, turning over and dragging back to their lair the prey upon which they feed, namely sea stars.

Sea stars would appear to be the least appetising of potential food sources but they possess a great deal of soft tissue under the tough exterior including the digestive gland, tube feet and gonads. The pair of shrimps go on the hunt for a victim sea star. Once located they will turn it over and between them drag it back to their hiding place most usually a hole in coral or rocky reef. The reaction by the sea star to being turned over is to basically shut down by withdrawing the tube feet and become inactive in the hope that the attack will pass. This behaviour serves to assist the voracious shrimps in their task as the sea star does not attempt to escape. The shrimp use their much smaller and tapered first pair of pereiopods that end in tiny nipping claws to remove small pieces of the outer skin to gain access to the internal flesh. These small claws can then fit inside the cavity created to remove small edible pieces and place them into their mouth. This action of the small pereiopods on the surface of the sea star has been misinterpreted in the past as the shrimp injecting the sea star with some form of anaesthetic due to the lack of any reaction by the sea star to the attack. An alternative feeding method that the shrimps employ is to start on the underside at the tip of one of the sea star’s arms, which provides an easier method of entry, and munch their way towards the centre thus avoiding any vital organs and keeping the sea star alive as a source of fresh food for as long as possible.

Sea stars have been known to occasionally make their escape by autotomizing (casting off) the attacked arm and leaving it behind. The shrimp may take turns at feeding or each may dine separately upon a different arm. The size of the sea star seems to make no difference to the shrimp who may not be able to drag a large specimen back to their lair but will instead start feeding upon it there and then. Whilst they are obligate feeders on sea stars there is a wide range of different species they will eat including the Crown of Thorns sea star (Acanthaster planci) although I have never personally witnessed this.

There is some debate about whether or not there are two distinct species of Harlequin Shrimp. Hymenocera picta was described first in 1852 from the Tuamotu Archipelago in French Polynesia. Later in 1861 Hymenocera elegans was described from the Gulf of Suez. The only difference appears to be in the colouration and distribution therefore many taxonomists consider H. elegans to be a colour variation only and hence a junior synonym of H. picta. 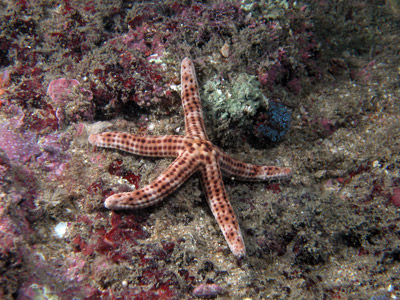 Above: An intact and healthy specimen of the sea star
Tamaria sp. feeding on the rocky reef substrate of the
Gneering Shoals off Mooloolaba, Sunshine
Coast, Queensland. 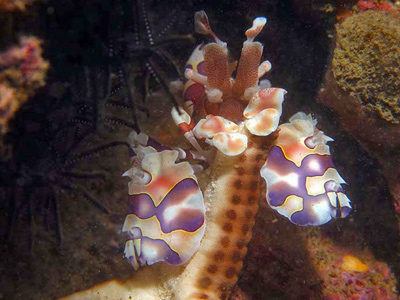 Above: A close up of a female Harlequin Shrimp holding
in position and feeding upon the tip of a sea star’s arm. 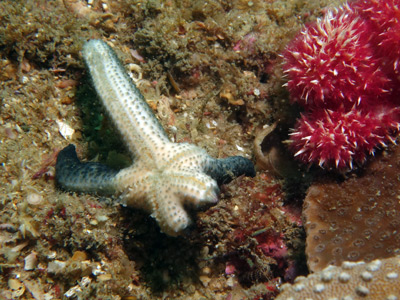 Above: This sea star appears to have been released
following the loss of two arms in its encounter with
Harlequin Shrimps. Provided the sea star survives
the trauma (and they usually do) the two chewed
arms will regrow. 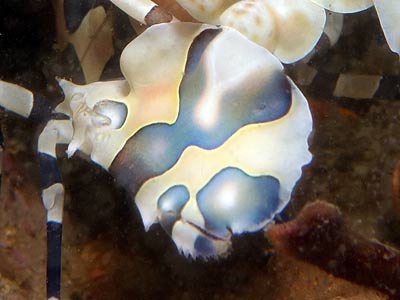 Above: A close-up of one of the shrimp’s bizarre large
flat paddle claws with its tiny nipper lower left.