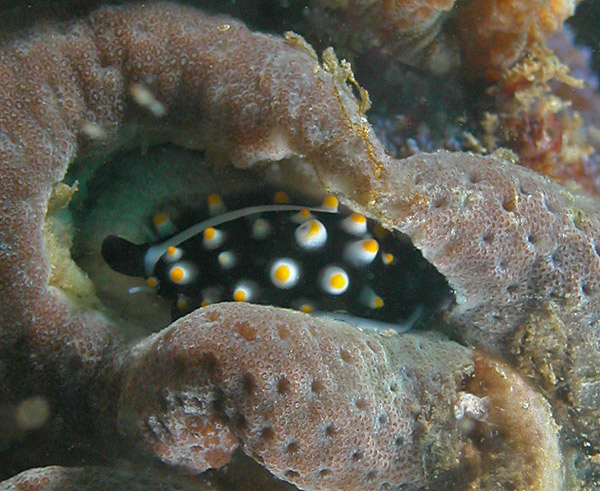 Above: A juvenile Ovula ovum looking very much like a toxic nudibranch as it
makes a meal of the soft coral colony upon which it resides. Old Woman Island,
Sunshine Coast, Queensland, Australia. (25 mm)

Cowries are classified into two families, the “True Cowries” – family Cypraeidae and the “Allied Cowries” (Egg Cowries and Spindle Cowries) – family Ovulidae. The shells of the adults exhibit those forms we all know so well; but what of the juveniles? With respect to juvenile ovulids they have a thin shell with a large aperture and an outer lip that has a very fine edge. As the juvenile matures from the typical gastropod shape into the adult it produces a large last whorl and that outer lip turns inwards and thickens along with the rest of the shell reducing the aperture accordingly and generating the distinctive cowrie appearance. As with the juveniles of all species they are very susceptible to predation. The juvenile of one species of egg cowrie in particular has evolved a method to ward off those potential predators.

Ovula ovum is an exception to the showy display put on by many of its relatives. Not for it the colourful shell with dramatic patterns and a correspondingly flamboyant mantle. Instead it has a pure white glossy shell, thus earning the common name of Common Egg-cowrie, with a pure black mantle covered in small white or yellow spots. The juvenile however has an altogether different appearance. Whilst the mantle has a background colour of black there are raised tubercles that have a grey/white base tipped with yellow. The appearance is without doubt quite similar to that of some of the toxic and distasteful phyllidiid nudibranchs such as Phyllidia madangensis and Phyllidia carlsonhoffi. It is this similar colouring and pattern that has a deterring effect upon those that would otherwise prey upon it. There are also quite a number of other phyllidiids with yellow tipped tubercles but with a black and blue background colouring. The change in appearance to the familiar adult form takes place when the cowrie grows larger than the adult size of the mimicked nudibranchs.

Ovulids feed upon the polyps of cnidarians notably gorgonians and soft corals. Ovula ovum in particular shows a preference for soft corals of the closely related genera Sarcophyton, Sinularia, Cladiella and Lobophytum all of the family Alcyoniidae. These corals produce substances in their tissues, referred to as anti-feedants, that are either toxic or unpalatable in an attempt to deter predators. In this they are successful apart from some specialist predators. Ovula ovum is one such specialist predator that has evolved the capability to break down certain toxins through metabolic processes. We often observe them feeding upon the soft coral colonies as pairs, most probably a male and female as the sexes are separate.

The species has a wide distribution throughout the Indo-West Pacific and extending down along both the east and west sub-tropical coastlines of Australia. 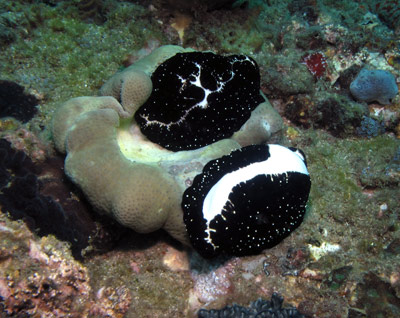 Above: A pair of adult Ovula ovum egg cowries
browsing upon a Sinularia coral colony. 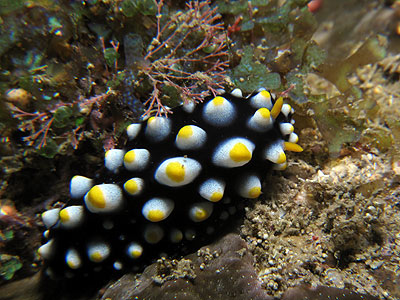 Above: The toxic nudibranch Phyllidia madangensis. 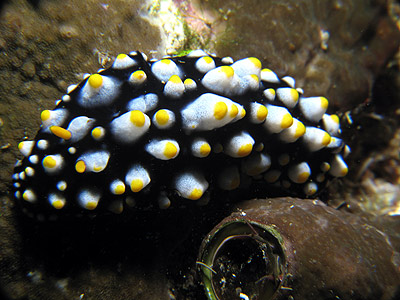 Above: The toxic nudibranch Phyllidia carlsonhoffi