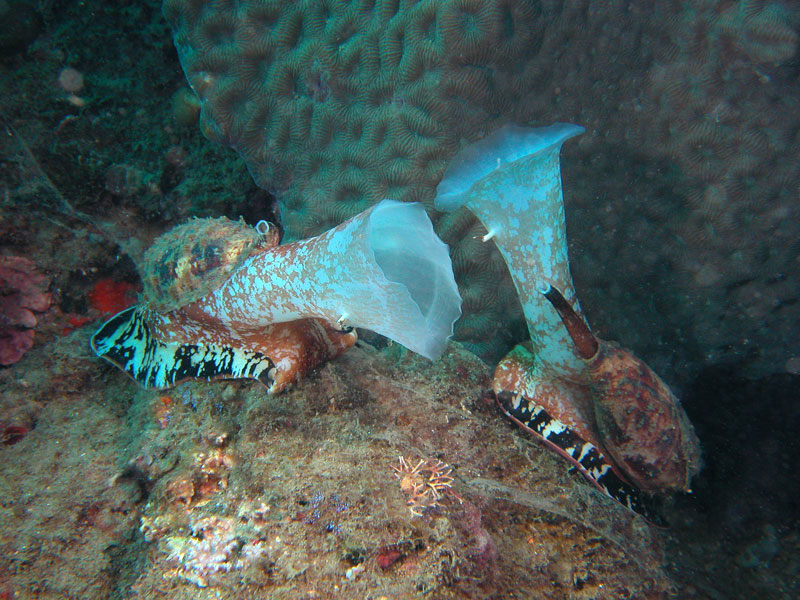 Above: Two Conus geographus facing off both having their rhynchodaeum deployed. This is an exhibition
of unusual behaviour. It could be a display of aggression, a prelude to mating or a territorial warning.
Atypically they were also active during the day. Photo taken in 15 metres of water at Old Woman Island,
Sunshine Coast, Queensland, Australia. (100 mm)

Cone Snails are predatory marine gastropods that, depending on the species, actively hunt for worms, other gastropods or small fish. All are nocturnal hunters using a modified radular tooth that is deployed as a harpoon from the proboscis to inject toxins into their prey. Those that hunt small fish (piscivores) are dangerous for humans to handle. Most cone snails are tropical but a few are adapted to temperate waters. There are more than 500 species.

Conus geographus is considered the most deadly of all the Cone Snails with 30 recorded human fatalities being attributed to incautious or uninformed handling. It hunts small fish at night and buries itself beneath the sand or the underside of rock ledges during the daytime. Their habitat specifically requires sandy regions next to areas of rocky or coral reef.

The shell is smooth and covered with a thin, yellow/brown periostracum which protects the shell. The shell and large foot have distinctive patterning and the siphon is nearly always extended and constantly moving in order to sample the water in front. Also visible is the opening to the proboscis sheath (rhynchodaeum) and attached on both sides are small stalks carrying the eyes.

Hunting is undertaken by crawling out in the open on the substrate or ploughing through the sand. Having located and manoeuvred sufficiently close to its prey the proboscis which can extend twice the body length, makes contact and fires the hollow dart through which neurotoxic venom is pumped to quickly paralyse and immobilise the impaled fish. The fish is then enveloped by the proboscis sheath that simultaneously extends as the proboscis itself draws in the attached prey which is swallowed whole. This method is referred to as hook-and-line hunting. Another method has been recorded whereby the proboscis sheath first envelopes the fish prey before harpooning it. It is thought that sedating chemicals are initially released into the water to slow down and disorient the fish. This is referred to as net hunting.

The sexes are separate and have a similar appearance. Fertilisation is internal. The eggs are deposited in capsules secured in clusters to the underside of rocks. The larvae hatch as free swimming veligers eventually settling out of the plankton to metamorphose after one to four weeks. Life span is thought to be approximately 3 years.

Conus geographus can grow to 160 mm in length and has a general tropical to sub-tropical Indo-Pacific distribution.