A PLAIN SHELL BUT AN AMAZING MANTLE 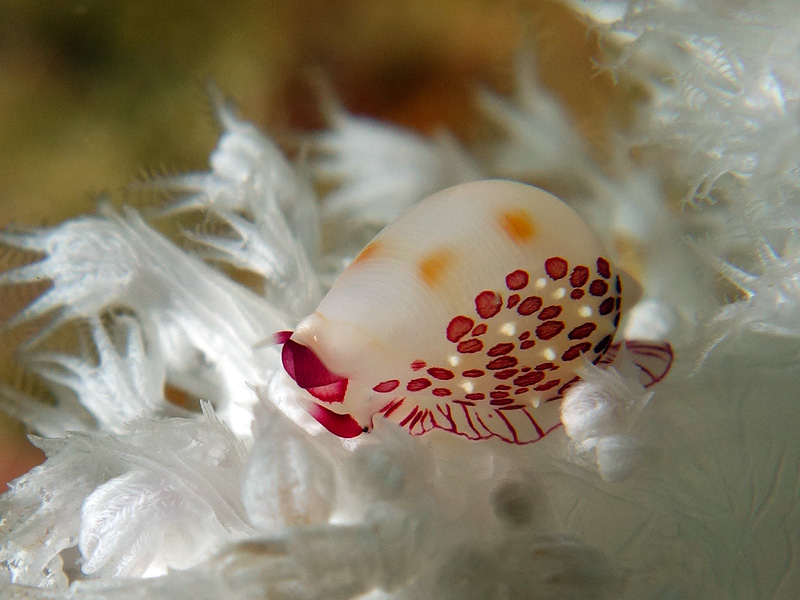 Above: The tiny and elegant allied cowrie Diminovula aurantiomacula showing the features of both the shell
and the mantle as it feeds upon the polyps of its soft coral host in 14 metres of water on the Arkwright Shoals,
off Coolum, Sunshine Coast, Queensland, Australia. (8mm)

The name cowrie is commonly applied to two separate families of marine snails. The true cowries – family Cypraeidae and the false or allied cowries – family Ovulidae, sometimes also called egg or spindle cowries in a reference to the shape of their shell. Both are grouped in the superfamily Cypraeoidea. The term false cowrie is used because although some do have a shell that resembles the true cowries they are considered a distinct group especially in habitat and diet. As well as some anatomical differences the strong and regular apertural teeth of the true cowries are lacking in the Ovulidae. The term allied cowrie refers to the fact that most are associated (hence allied) with a very specific host upon which they feed. Whilst the true cowries are divided into sponge eaters and herbivores grazing upon algae, the allied cowries live on and eat the polyps of cnidarians such as soft corals and gorgonians. Whilst their shell may be rather plain the beautiful mantles are anything but. They live their whole adult life upon the host to an extent that they could be called ectoparasites because the host receives no benefit from the association.

Diminovula aurantiomacula is a small allied cowrie with a maximum recorded shell size of 12mm. It is referred to in some works as Diminovula punctata however this name is now considered invalid.

The shell is globose in shape and smooth but carries fine striae on the dorsum. The anterior and posterior canals are well developed. There are three faint bands of gold each containing a pair of distinct and darker blotches on the white or cream background. It exhibits an encircling thin yellow line – faint in the specimen shown here.

As with all the cowries the bi-lobed mantle is usually always extended up and over to meet at the midline to cover the whole shell. The shell is laid down on the external surface by cells lining the inside of the mantle and this serves to keep it in the shiny lustrous condition. Externally the white mantle is covered with irregular shaped red spots of varying size outlined in a darker red. In between these spots (i.e. not arising within them) are small white papillae. Although these papillae are quite plain in some other species they are developed such as to perfectly mimic the polyps upon which the animal feeds. The white foot has a thin red margin to which radiate red lines. The anterior siphon is red as are the eye tentacles that end in a white tip.

They feed upon the soft polyps of the Dendronephthya soft corals.

There is another family of marine snails that resemble the cowries – the bean cowries – family Triviidae. Most of these however are distinctive in having transverse ribs across the back of the shell.

Acknowledgement: I wish to thank Sue Churchill & Rogan Draper for taking the time to confirm the identity for me. 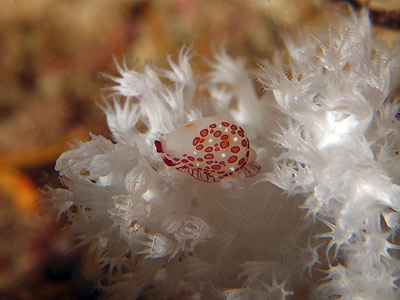 Above: Surrounded by all the polyps that it eats 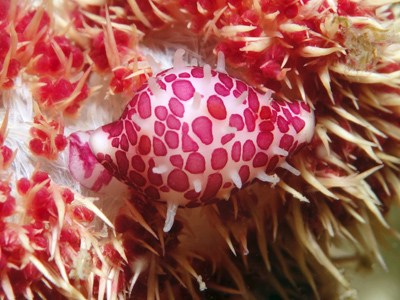 Above: Another specimen of  Diminovula
aurantiomacula with its mantle fully expanded
and enveloping the shell.